An award winning, five-part documentary series produced by the Desert Sun, California in Overdraft, chronicles the water crisis in California and around the globe. We’ve not talked a lot about subsidence on our blog and now couldn’t be a better time to start. Our focus today on chapter four, Sinking Ground, includes contributions from USA TODAY Investigative Reporter Steve Reilly.

Land subsidence occurs when large amounts of groundwater have been withdrawn from certain types of rocks, such as fine-grained sediments. The rock compacts because the water is partly responsible for holding the ground up. When the water is withdrawn, the rocks falls in on itself. You may not notice land subsidence since it can occur over large areas instead of a small spot like a sinkhole. Just because we can’t see it that doesn’t mean it’s not there causing states like California, Texas, and Florida hundreds of millions of dollars in damages over the years. In a short video, Michelle Sneed, USGS Hydrologist, explains subsidence and the impacts of declining groundwater. (Please visit here and select Chapter 4, Sinking ground to view video)

In 1977, U.S. Geological Survey scientist Joseph F. Poland posed next to a telephone pole in the San Joaquin Valley with signs marking where the surface of the ground sat in 1955 and 1925. Now a famous image, and perhaps the first “viral photo”, it demonstrates the findings of his research and provides a stark contrast of severe subsidence overtime. See the photo here where the sign for 1925 sits about 30 feet higher than the ground Mr. Poland is standing on (Credit: Dick Ireland, USGS.) 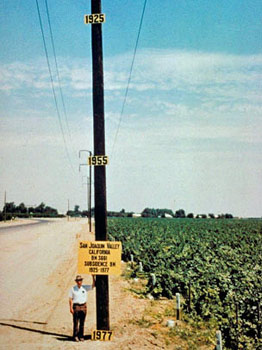 “Since then, a series of canals was built to bring water to the area, and the sinking of the ground slowed. But it has continued elsewhere, and has accelerated in other parts of the San Joaquin Valley during the past few years.”

USGS hydrologist Claudia Faunt in conjunction with Michelle Sneed have been closely following the subsidence problem. Using satellite images and groundwater level measurements they have determined the compaction of the aquifer. Faunt and Sneed are no stranger to the realization that subsidence is a major concern for the continuous sinking of San Joaquin Valley and are hopeful that improved groundwater management and increased pumping regulations will balance the valley’s water account.

“We really need to think about what we’re doing in between droughts and how to manage the water and get water into the ground between the droughts,” Faunt said. MaxWell® drywells are an inexpensive, low-impact solution that can make a difference for San Joaquin Valley’s groundwater crisis.

Gleick, of the Pacific Institute suggests speeding up plans for sustainable management.

1). Figuring out how to manage surface water better in order to prevent overdraft and boost groundwater levels. That includes capturing more runoff during intense storms to recharge aquifers.

3). Cutting back on pumping where it’s necessary. In some places, he said, people are simply taking too much out of the system and “the only way to bring it back into balance is to reduce what we’re doing.” 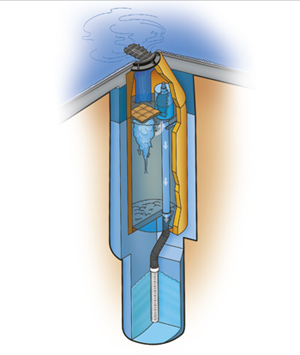 Practical solutions begin with drywells. Not only are drywells a small footprint stormwater management solution, they come with an affordable price tag and improve a projects capacity for aquifer recharge. Torrent is ready to help California take the first steps in the right direction towards sustainable water supplies – are you?