The prolonged California drought has gone from a footnote to one of the biggest stories in the country. Conditions have become so desperate that massive water conversation efforts are underway and a recent NASA satellite image has scientists believing there may only be a year or less of groundwater available in some areas. While it may not be a short term help to the drought problem, the use of drywells for the deep infiltration of stormwater is becoming more prevalent and presents an excellent long term solution.

During a recent parking lot expansion in San Diego at UCSD, shallow infiltration was being considered as a means of stormwater management. However, testing would later reveal that soil conditions would prevent this from being a viable option. Torrent Resources pitched the Civil Engineer on the idea of utilizing MaxWell drywells to get water off the surface and into the sub grade quickly, where it would eventually replenish the aquifer. The project team had already spent a lot of money on shallow infiltration testing that did not work, so the thought of more money thrown at a solution that wasn’t guaranteed to work was not appealing. To help this effort, Torrent Resources contracted directly with a Geotechnical Engineering firm to drill a small diameter hole to a 90′ depth to evaluate the soil composition. They would then perform a percolation test to see if a deeper system would more readily accept water. The results were very encouraging and it was determined that two MaxWell drywells would be installed.

The drywells were installed in February of this year and a constant head percolation test was performed on each in March. The wells tested at a disposal rate of .28 cubic feet per second, an astounding rate that proved the MaxWell drywells not only did the trick, they were far more effective than anyone could have imagined.

With on-site infiltration the preferred method of disposal and first option to consider in San Diego and throughout many communities in the Southwest, results like this help give confidence to the design community that there is finally a product that provides exceptional pre-treatment with infiltration rates that easily allow for regulation compliance.

Torrent Resources is putting together a case study on this project to discuss the challenges and how they overcame them. That study will be posted here when complete. 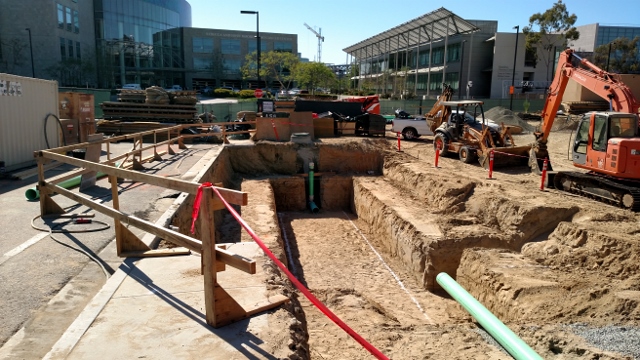