About Us - MaxWell Drywells for Stormwater Infiltration

Torrent Resources, a CRH Company, has evolved into a full service stormwater solutions provider, specializing in stormwater infiltration. The success of our Company has been recognized at local, state and federal levels, as we have partnered with government agencies to develop stormwater regulations. The MaxWell Type IV and MaxWell Plus drywell systems are the industry standard stormwater BMPs for deep infiltration. While we have installed more than 75,000 of these systems in Arizona and California, the company has numerous installs in Texas, New Mexico and Nevada with new territories on the horizon. 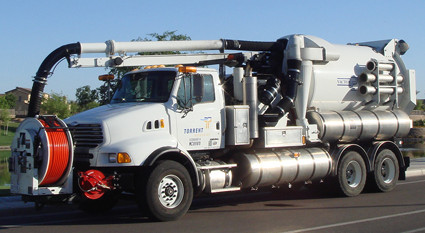 The seeds of what eventually grew into Torrent Resources were first sown in Phoenix in 1972 as McGuckin Drilling. Driven by expanding development boundaries and a swelling population, Phoenix in the 1970s was rapidly outgrowing its storm drain infrastructure. Without sufficient storm drain capacity, many cities subsequently mandated the use of on-site retention for the elimination of stormwater runoff. Seizing the opportunity, the team at McGuckin Drilling recognized the need for an alternate and more efficient system for stormwater disposal capable of infiltrating excess stormwater into the sub-soils. Research into how this could be reliably and economically accomplished led to the development of the first MaxWell design in 1974, followed by improvements with the successive MaxWell II and MaxWell III designs.

The State of the Art Designs

Further research and development to improve product designs led the team at McGuckin to participate in one of the most significant drywell studies in the nation. This study, also known as the MAG Drywell study and funded by the EPA was conducted by the Maricopa Association of Governments and the Arizona Department of Health Services in a typical parking lot in Phoenix. The study concluded there was no degradation in groundwater quality. The results of the study and other research led to the development of the MaxWell® IV, MaxWell® Plus and the specialized Envibro® System for draining fuel handling areas.

The organization that began as a small provincial drilling firm morphed into a diverse company servicing five states. The Company changed its name to Torrent Resources to accurately portray the vast scope of stormwater management products and services offered.

Due to strict municipal and state regulations of drywell maintenance, Torrent Resources has added inspection and hydrovactor cleaning services for stormwater management infrastructure by utilizing its fleet of hydrovactor trucks and team of highly qualified stormwater specialists. The Company has also developed the budget friendly MiniMax® Area Drain for properties with small drainage problems.

The success of the Company continues to grow day to day. From assisting Civil Engineers in their site specific drainage design, installing drywells and servicing all stormwater structures, Torrent Resources has become the watermark for drainage solutions.