Actually, the correct term is subsiding not sinking and it may sound totally ridiculous, but it’s true. The San Joaquin Valley in central California is sinking at a measurable rate. In some areas, NASA estimates the ground is dropping as much as 2 inches per month. It’s been happening for decades, but the increased groundwater pumping for agricultural purposes has increased the rate of subsidence across the region. There is no shortage of both technical and editorial information about this important issue, which seems to be yet another casualty of the current drought.

Subsidence occurs many feet below the ground surface as a result of groundwater withdrawal in combination with limited stormwater infiltration. It occurs when clay particles (picture a popsicle stick), which typically form loose, random patterns when hydrated get dried out and then flatten and collapse…and once it drops, the effect cannot be reversed. The image titled Sinking Ground below left depicts what occurs as the ground subsides.

Subsidence can sometimes be hard to recognize because it happens on such a massive scale, such as the area within the San Joaquin Valley, which is approximately 180 miles long and 30 miles wide as shown in the image below right. Besides losing elevation at the ground surface, subsidence can wreak havoc on infrastructure such as streets, bridges, and underground utilities, as well as reduce the overall capacity of groundwater aquifers for the future. There is no way to anticipate which infrastructure components will fail, when they will fail, or what the impact will be, but the financial costs alone are likely to be many millions of dollars.

Despite the serious consequences, farmers say they have the right to pump and they’re correct, because California only recently passed legislation for groundwater management and most of it won’t take effect for years. Rather than let their fields go fallow or let their crops to die, Central California farmers are shelling out hundreds of thousands of dollars to drill record numbers of new water wells, often to depths of more than 1,000 feet. During the first 1/3 of 2015, there were 660 water well permits issued, which was up more than 72% over the same time period the year before.

As the drought continues, it is very unlikely that groundwater pumping will be reduced, but crafting policies aimed at capturing stormwater to increase infiltration could help to slow subsidence across San Joaquin Valley. Using drywells to recharge stormwater into the vadose zone beneath the agricultural region could help keep those clay particles hydrated, which would then prevent their collapse. Such policies have been used in Arizona for more than 40 years and have been hugely successful at not only minimizing subsidence, but actually increasing groundwater levels. In our July 27th blog titled Stormwater Retention = Groundwater Recharge … A Phoenix Success Story, the City of Chandler found that their stormwater management policy, which includes the use of drywells for infiltrating accumulated stormwater, increased the rate of annual aquifer recharge by more than 1,000%. 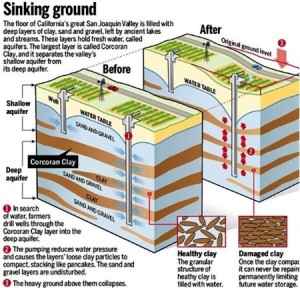 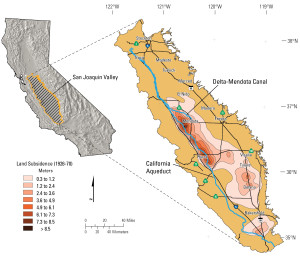