Lately, the City of Los Angeles has been on a serious mission to turn their streets green by installing infrastructure that creates beauty, reduces flooding and erosion, and increases groundwater recharge. It may seem like the current drought is the driving force, but their green efforts started long before the drought began. Perhaps the drought conditions merely served to crystallize the importance of managing water resources responsibly and amplify the willpower to take action. In any event, LA’s streets are turning green one after another and though the main purpose of green infrastructure was once aesthetics, the primary talking points have shifted to stormwater and aquifer recharge. The following list represents some of the more prominent Green Projects happening across Los Angeles.

The Avalon Green Alley Demonstration Project, which was meant to be a replicable model to be used across Los Angeles, converted an old, dilapidated alley into a neighborhood amenity that serves as a tremendous source of neighborhood pride. Potential annual recharge estimated at 2 million gallons.

The Glen Oaks and Sunland Avenue Project used Proposition O money to install a number of green infrastructure improvements, including bioswales and drywells. One Prop O Committee Member said the Glen Oaks Project was “The most ‘cost effective’ of all Prop O Projects (considering dollars per acre feet of stormwater diverted into groundwater).” Potential annual recharge estimated at 9.3 million gallons.

The Elmer Avenue Retrofit Project was borne out of the Los Angeles Water Augmentation Study, which called for a decentralized approach to managing stormwater. Potential annual recharge estimated at 5.2 million gallons.

An upcoming project that has gained much media attention is the Laurel Canyon Boulevard Project in Pacoima, CA. While considered a green infrastructure project, the primary focus is on how the project was designed to capture and recharge up to 13 million gallons of stormwater annually…enough water to support 120 homes a year. The project lies with Los Angeles’s 7th District represented by Felipe Fuentes. Councilman Fuentes’ office has been a strong champion for projects such as these, whether crafting legislation for their use or actually spearheading them. We will be watching this project closely and report back when the planning phase is complete and when construction begins. 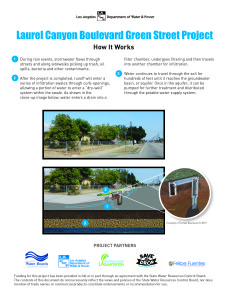